The current task switcher does have the small circular plasma button, but it is hard to press because it is so small. It would also be nice to have a "clear all" applications button and a button to switch between app previews and an app list.

It could be a good idea to reserve space below the applications list for the buttons so they can be much bigger. Similar to the mockup below (in terms of layout, not button functionality necessarily) 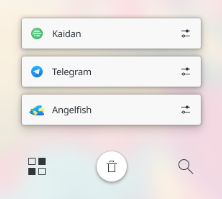 Possible idea to have the plasma button centred, close all apps to the right, and switch between app preview/app list on the left.