When implementing those, I forgot that @ivany is implementing parallelism for some assistants... I hope my code can still be used and won't make changes for Ivan more difficult.

Why I made this:

I was drawing a house in 3 point perspective and those were two biggest issues that I knew I can quickly fix. Commit 1 was important, because it would save me lots of time I spent on remaking strokes and undoing them after seeing them wave; commit 2 would save me time that I spent on ensuring (and remaking and undoing strokes...) that my vertical lines adhere to my 3rd vanishing point and not to just the vertical lines from 2PP assistant (especially since the 2PP assistant is more "sticky" than the VP, probably because since it has three possible lines, so there is 3x higher chance it would be the one selected as the main one). 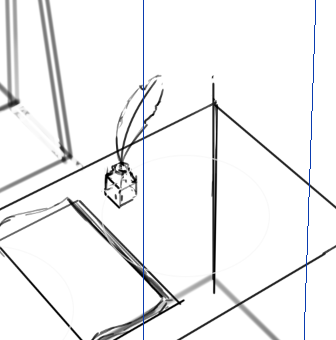 (blue ones are from VP, but the image shows that my first stroke was purely vertical and I had to redo it).

@nmaghfurusman - I hope you like my little improvements. Btw, why you haven't implemented 3PP? It looks like 90% of the code is already there, the only thing left is to create a new class for 3PP (and possibly making it draw vertical lines, even though 2PP doesn't do it).

@ivany - I hope those are small enough changes that won't break/interfere with your work on parallelism...