SortProxyModel reorders the results provided by krunner. It uses the query input string to judge the associated results and sort them. It works great, however we have a little bug that causes a nonsensical list to be shown for the a few milliseconds right after we input a new query string.

At the time setQueryString() is called, we still haven't received any matches result list from krunner for this new query. Milou still has the previous query's results, which are completely dissociated from the new query input.

So at this point it was doing its logic using the old results list from the previous input string, but evaluating them against the newly provided input string, which resulted in bogus behavior.

1 - We type string "fire" and wait for the query to finish and the final results are displayed. We get this result set: 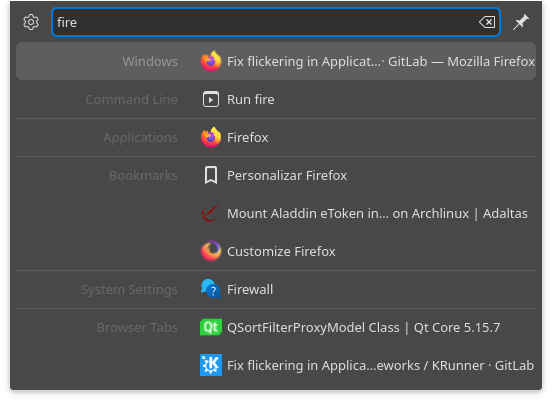 So SortProxyModel is processing the results from "fire" using the string "firef" as criteria to judge its sorting, and this results in a quick exhibition of this bogus list to the user.

This is only shown for 250ms. It took some tries to take a screenshot of it, but here it is: 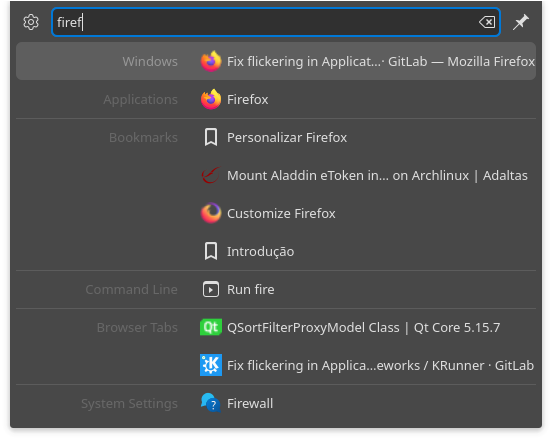 As we can see, we have some bogus results like "Command line: run fire" and "System Settings: Firewall" that have no business being there for the input string "firef". They are there because they are still the results from the old "fire" query. Also the ordering is different from the first list since the proxy judged the relevancy in a different manner because it's evaluating that list against the string "firef" and not "fire".

3 - 250ms later, krunner will have provided its results for "firef", and SortProxyModel gets in action again, now sanely sorting the "firef" result against its associated "firef" input string, and we get this final correct list: 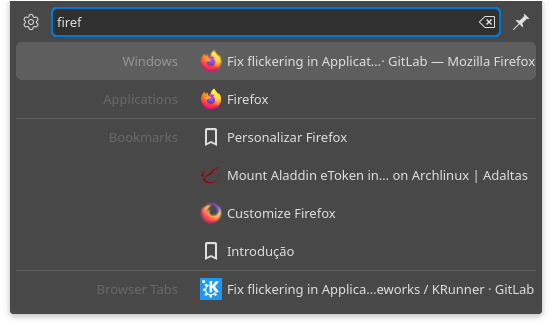 With this patch applied, the bogus list in step 2 above will never be generated and it won't be shown to the user.